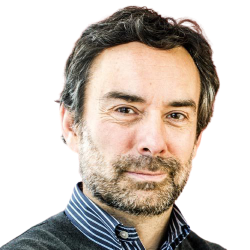 Andy Burnett is Patient Zero, infecting the rest of us with the KI ethos: Only work with people who make you laugh. Andy’s work in deliberate creativity was the inspiration behind the first Sandpit in the U.K. (called Ideas Labs in the U.S.). He is a recovering academic who holds an undergraduate degree in Management Science from Loughborough University and a Master’s degree in Creativity and Change Management from the State University of New York in Buffalo. Andy served as a research fellow at the Cranfield  School of Management, where he co-developed the Centre for Creativity. He is one of KI’s tech gurus, developing KI’s virtual events.

Andy was still at the Cranfield University when he facilitated his first workshop for scientists. While it’s true that the facilitation team was able to surprise researchers with their own ingenuity, they also wound up surprising themselves. It turned out that deliberate creativity managed to do for scientists what they had been trying to do for decades: break down silos and accelerate innovation. According to Andy, it was all a happy accident.

Andy’s co-workers appreciate his empowering style. They note he has never been heard telling anyone what they ‘should’ do. Co-workers and clients alike appreciate the way he listens to their stream of consciousness ideas or the challenges they are experiencing. He summarizes what he has heard, giving a novel perspective on how to move forward or resolve difficulties.

Anyone who meets Andy will notice that he has the wit and timing of an improv comic and that he is in every way deliberate in word and deed. He not only works this way, but lives this way. At one point during his single life, he sold everything and moved into an empty apartment, slowly acquiring only the necessities. It was his own life experiment. He didn’t last long without a bed. The kitchen, however, never got much use.