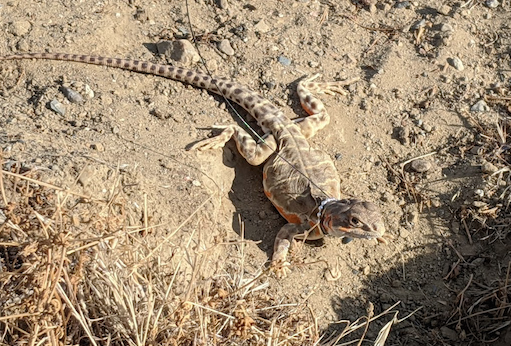 Dr. Rory Telemeco, Assistant Professor in the Department of Biology at Fresno State, seems fated for a career studying lizards … and maybe even saving them.

“I was a dinosaur nut as a kid,” he said. “Totally, I was the little boy in Jurassic Park.”

His passion for predators led him, ironically, to be involved in efforts to preserve the Blunt-nosed Leopard Lizard, which has long been on the endangered-species list.

“This species mostly eats arthropods — grasshoppers, spiders — but will also eat other lizards and small rodents if they get the chance,” he said. “They’re the biggest lizard out there. They’re one of the top predators.”

Top predators notwithstanding, they are federally listed as an endangered species — in fact, they are one of the inaugural species on the original list in the Endangered Species Act of 1973. And they are still at risk.

Dr. Telemeco is hoping that his work can change that. But then, he always did have a liking for lizards.

In college, his very first class at the undergraduate level was Zoology at 8 a.m. on Mondays, Wednesdays, and Fridays. His professor happened to work with … you guessed it, lizards.

Needless to say, the class appealed to Dr. Telemeco, despite the early hour at which he had to be on campus.

“I always liked reptiles, anyway,” he said. “So I started that year working to understand social behavior in Collared Lizards with my professor, in their habitat.”

Although Dr. Telemeco made several forays into trying other areas of study, such as working at a vertebrate paleontology lab for a few years as an intern, he eventually found that he was steering away from studying fossilized bones and more toward studying live lizards. Yes, lizards. Again.

“I also really like snakes,” he said, “but, due to my allergies to anti-venom serums, I decided there were enough people studying venomous snakes.”

So, back to lizards.

It was when he received a Fulbright scholarship and did his master’s work in Australia that Dr. Telemeco began studying life history theory, which describes how evolution shapes how much energy species put into reproduction.

“The theory looks at what are the evolutionary pressures that act on animals to make reproductive decisions, what ends up being the optimal strategy,” he said. “At the same time, I became more and more aware of climate change, and how changes in the abiotic factors of the environment affect life history, especially in animals whose welfare is really linked to temperature.”

These two interests coalesced into … yes, once again, studying lizards …  the Blunt-nosed Leopard Lizard, to be more precise. These lizards are endemic to the San Joaquin Valley and only live in fairly undisturbed desert habitats.

The more you learn about them, the more these little lizards seem incredible. They find ways to survive against the odds.

“As ectotherms, lizards historically have been thought of to be much under the whims of the environment,” Dr. Telemeco said. “Turns out, they have a lot of tools for modifying their body temperatures. They’re just not doing it metabolically, like the endotherms, mammals and birds, are.”

Dr. Telemeco is part of a multi-agency collaboration with the U.S. Bureau of Land Management, Cal Poly San Luis Obispo, and the Fresno Chaffee Zoo performing range-wide work on northern and southern groups of the Blunt-nosed Leopard Lizard.

“We try to understand the ecology involved in preserving this species and what kind of habitat they need to have,” he said.

The Valley at one point was basically desert scrub and huge wetlands, and rapid changes in the environment appear to have negatively impacted the Blunt-nosed Leopard Lizard’s normal reproduction rate.

“It was a very different landscape a hundred years ago,” Dr. Telemeco said. “Probably because the environment is now so harsh with modern landscapes, these lizards only seem to live a couple of years in the wild, and they are not reproducing as much.” 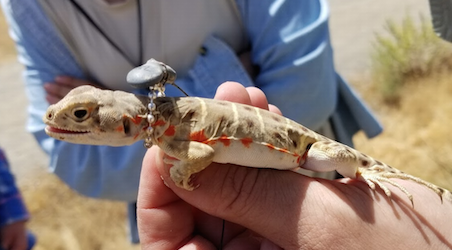 In order to find a way to increase the lizards’ chances of survival, he and his students put temperature-sensitive radio collars on them, then use stationary antennas in the landscape to pick up the signals that allow for real-time body temperature measurements on the animals throughout the year.

“We’re looking at some of these desert landscapes they live in,” Dr. Telemeco said. “Some of them look like just bare earth, with no cover, and others have spotted shrubs on them, the most common being Ephedra californica, or the California jointfir, or cañatillo. We are testing how important the shrubs are to Blunt-nosed Leopard Lizard habitats.”

Being a lizard isn’t as easy as it sounds. Basically, the landscape is too hot during the day and too cold at night for the lizards to be active, so lizards have to resort to going into their underground rodent burrows.

“What we’ve found is all the microhabitats in landscapes without shrubs get way too hot, deadly hot, late in the day,” Dr. Telemeco said. “But the lizards are still maintaining a good temperature, by going into their burrows, probably deeper underground than we’ve measured … that’s their only option, to go underground. But if they can just climb a couple of inches above ground into a shrub, they can stay out happily longer in their habitats.”

Measurements confirm that lizards can stay above ground more often during the day if they have shrubs available.

“It looks like areas with shrubs give them an extra three hours a day in which they can be out and about, living their lives out of the underground burrows,” he said. “We’re trying to see how they can use the landscape to maintain their body temperatures, and what’s constraining them when they can be out eating and reproducing. Our study results potentially put more focus on preserving landscapes with a complex shade structure.”

“They can produce three clutches per season, from about April through the very beginning of July,” he said. “Outside that time, they go into the non-reproductive phase of their life.”

So do lizards make good parents?

“With lizards, the diversity of things that they do is very extreme, everything from individuals that will lay eggs and leave, which is probably the most common,” he said. “Then there are species of skink that will rotate the eggs during incubation and stay with them during development. Then there are alligator lizards that will guard the nest. There are even species that give live birth, keeping their developing young in their bodies.”

What do the Blunt-nosed Leopard Lizard do?  Scientists know they lay eggs, but beyond that aren't really sure because a natural nest has never been observed.  The best guess is that they typically lay the eggs in an underground nest and cover them with dirt. Sounds like easy parenthood, doesn’t it? But only a small number the young seem to be surviving.

Finding optimal habitats could be the key to reversing that. Dr. Telemeco and his teams also study what the lizards’ home ranges are, figuring out exactly how they’re using the landscape.

One thing is for sure … this California native species is lucky to have someone like Dr. Telemeco looking out for its future. 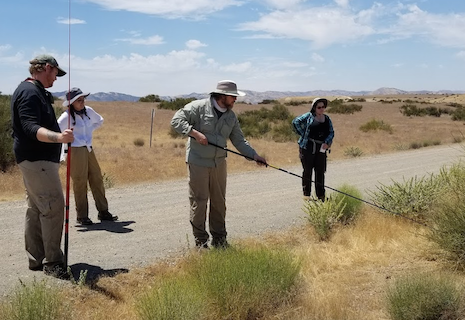