Do birds of a feather flock together? 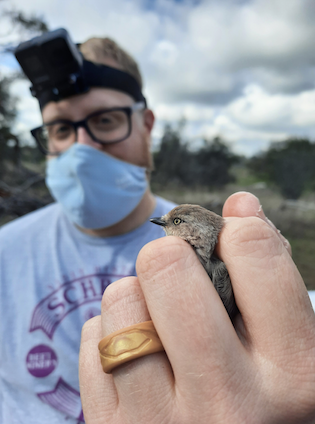 Joel Slade, an assistant professor of biology at Fresno State, can tell you that the adage that birds of a feather stick together is not always true.

That’s because some birds may choose to mate with individuals that are genetically different from themselves, at least where he thinks it counts the most – their immune genes.

Dr. Slade's expertise is in avian ecoimmunology and evolutionary ecology. He’s not running a dating service for birds — as in, fill out this questionnaire, and presto! you get the mate of your choice. But he is interested in several aspects of avian ecoimmunology, such as how urbanization may impact the evolution of the avian immune system, and how birds may relay information about their immunogenetic quality through sexually selected traits, such as ornate plumage.

Originally from Nova Scotia, Canada, Dr. Slade grew up on the Atlantic coast and became captivated by marine animals, and studied as an undergraduate to become a marine biologist and oceanographer.

“Growing up I always had an interest in wildlife, or just nature in general,” he said. “I grew up with tide pools and I liked being in the water.”

How does a scientist go from studying marine life and oceanography to studying birds?

“During my undergrad studies, I took a course in field ornithology and it completely changed my trajectory,” he said.

That was it. He was officially addicted to bird biology.

While it’s true that Dr. Slade never started a dating service for birds, at one point he became quite interested in their avian behavior and sexual selection — looking at exactly what it is that motivates birds to make their choice of mate. Birds can be quite elaborate in their appearance and mating rituals, and this does seem to have an impact on who gets to mate the most. Most songbirds are not loyal to their mate at the nest as some males produce extra-pair young in the nest of other males in the population.

“Many studies have found that sexually selected traits, such as plumage coloration are great predictors of reproductive success, however, barely anyone investigates the genes the offspring may inherit from their parents,” he said.

“There has to be a good genetic reason why a bird is going to choose one individual over another as a mate,” he said. “This is a big question. It depends on the species, but in some species, the father takes care of the young too. There has to be some kind of signal to a female that he will be healthy and provide resources, or good genes, or both, for the offspring.”

These questions led Dr. Slade to investigate an important set of genes during his Ph.D. that is directly involved in disease resistance - the major histocompatibility complex (MHC), which is known as the cornerstone of any vertebrate’s adaptive immune system. These genes encode proteins that present pieces of pathogens to T cells, which mounts an adaptive immune response, which often results in the production of antibodies against the invading pathogen.

“The variation within the ability to present these pathogen-derived proteins could make or break your health,” he said. “You could have high genetic diversity in these genes, and be able to respond to more pathogens, but if you have low diversity in these genes, you are limited in your initial immune response. What makes a difference in some animals is choosing a mate that is compatible with their genotype at these genes, that is, one that is genetically different from themselves. This way, their offspring will maximize their diversity at these immune genes and can respond to more pathogens.”

But how can birds tell who has compatible MHC genotypes? 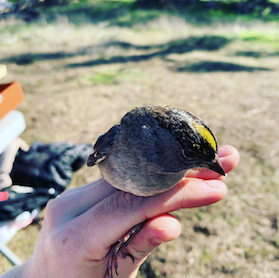 “When birds preen, they are taking an oily substance secreted by a gland at the base of the tail and rubbing it all over their feathers,” he said. “These oils, under heat, can become a scent. So, in my Ph.D., I looked at the chemical composition of preen oil, and their MHC genotypes in song sparrows, and I found that there was a relationship.” This means that this oil is a strong candidate to be a signal avian MHC genotype, and further research from the same lab where Dr. Slade completed his Ph.D. provided support for this hypothesis.

Like Goldilocks and the three bears, it seems, too little or too much [diversity] is not what songbirds are seeking. It’s something in between that works better for some animals.

“I found that the male song sparrows that sang the most song types, which is a sexy trait for this species, actually had intermediate numbers of MHC alleles. Since too much MHC can be a bad thing, like causing autoimmune disorders, then it may be better to have intermediate levels of MHC diversity,” he said. “And I found that wild song sparrows tend to choose mates that weren’t too different at MHC, which I think is a way to maintain optimal MHC diversity.”

Dr. Slade and his students are studying the factors that affect avian immunity and sexual selection. Currently, they are trying to establish a population of violet-green swallows at the San Joaquin Experimental Range, by installing nest boxes.

“I’m trying to recruit students who want to go outdoors but also do research in COVID-safe conditions,” he said. “I’m trying to get the students involved in research projects such as monitoring nest boxes. Last week, in my ecology and evolution of birds course, we went around campus and looked at the incredible diversity of birds that call Fresno State home. But soon, as it gets warmer, we’re going to go up to the experimental range to start working on birds that breed in nest boxes.” 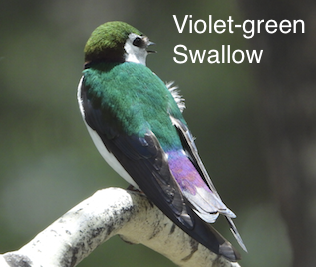 He and his research students work on western bluebirds and violet-green swallows but are also interested in other species at the experimental range. Since most birds do not use nest boxes, Dr. Slade must learn to catch them a different way – with mist nets, a fine-mesh net that birds can’t see.

“At least once a week, I have been mist-netting, and banding birds with an experienced colleague,” he said. Dr. Slade and his colleague affix a lightweight aluminum USGS ID band on a leg for every bird they catch. The data they get from banding birds goes into a database, which is important in understanding their population trends and conservation.

Since Dr. Slade is interested in bird conservation, he also wonders how humans are impacting the evolution of the avian immune system.

This curiosity drives a large part of his research program, which is examining how environmental factors can help shape birds’ resistance to disease.

“My interest is in trying to understand how the immune system can shape their behavior, and how environments, like urban environments, affect immunity,” he said.

Low gene flow in an urban environment can lead to limited genetic diversity. And this could be bad for birds who are facing urban stressors and increased disease transfer in the city.

Several urban factors affect birds and their health, including food availability, pollution, artificial lights, and more. But does city life always spell disaster for a bird? 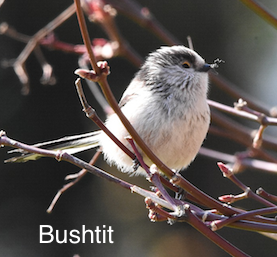 To find out, Dr. Slade is interested in house finches, a bird commonly found at bird feeders in the Central Valley, and bushtits, a small bird that has been occupying urban Fresno since the 1990s, to see if there are any (dis)advantages to being in urban environments.

A major threat to the birds on campus is the stray cats, which increases the danger to birds. “I think people should take this seriously and think about ways we can protect the birds, as cats kill between three to four billion birds a year in the United States, but we also need to find a way to help the cats too,” Dr. Slade said. 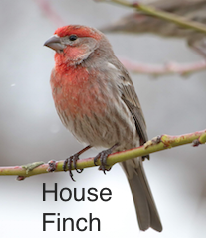 One of his students is studying house finch coloration, and whether it is an honest signal of immune gene diversity. Feeders on-campus help Dr. Slade and his students attract the birds so research can be conducted, but campus cats can decrease the number of birds that eat at bird feeders. Dr. Slade also reminds us to clean our bird feeders! Even though they provide supplemental nutrition for birds, they can easily become a place where birds transfer diseases to each other, such as Salmonella, which is currently causing deadly salmonellosis in local pine siskins.

“Keeping birds in close contact with each other just spreads the socially transmitted pathogens,” he said. “I think one of the most important things to remember is that it’s very easy for people to take birds for granted … until they’re gone.”

Dr. Slade is excited for future research in his lab and continues to work towards conserving our amazing local avian fauna.

Joel Slade holds a B.Sc. in Combined Honors Marine Biology and Oceanography from Dalhousie University, an M.Sc. in Applied Science from Saint Mary's University, and a Ph.D. in Biology, University of Western Ontario. 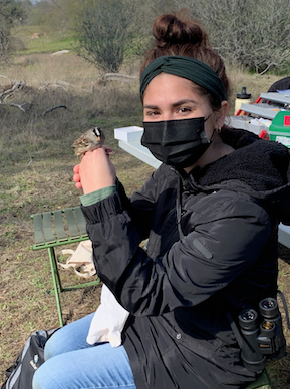 (At left) Esther Fernandez (M.S. in Biology)
with a white-crowned sparrow. 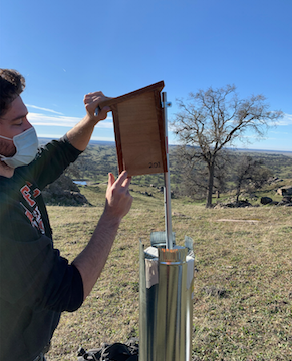 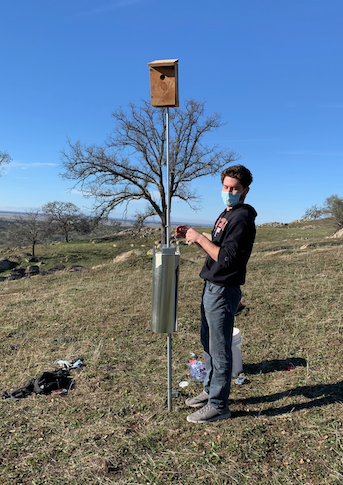