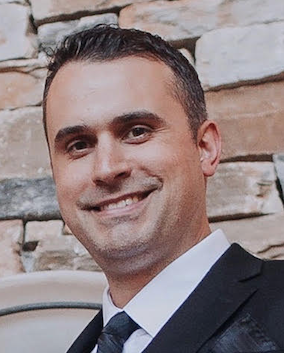 Robert Gaeta credits mentors in the Department of Biology at Fresno State for influencing the direction his career took.

“Your mentors and your cohort are so important — providing support, friendship, and challenging you to push yourself and grow,” he said.

Those connections with Fresno State mentors have made a big difference in his life.

He also learned through daily associations with his peers in the graduate program, sometimes through little things.

“You learn a little about their research interests and expertise along the way, and sometimes spend time over lunch break finding black widow spiders near the greenhouses,” he said.

With a B.S. in Biology and general interests in biotechnology, Robert was looking for work in his field. That led him to e-mail Dr. Fred Schreiber, who was chair of the Department of Biology at Fresno State at the time.

“He passed my note along to Alejandro Calderón-Urrea, who was in the relatively early years of developing his research program at the University,” Robert said. “Alejandro reached out and asked me to stop by campus, and at some point he presented me with an opportunity to take a position as a technician in his lab. After six months or so, Alejandro encouraged me to apply to the graduate program conducting research in his lab.”

Dr. Calderón-Urrea introduced Robert to plant biotechnology and microscopy, and Robert fell in love with both.

“One thing I have learned over the course or my career is that simply showing an interest in someone, showing belief in their potential, and being there to provide open and honest feedback to support them can have a profound impact on their career trajectory,” Robert said.

In addition to invaluable guidance from Dr. Alejandro Calderón-Urrea, who was his graduate mentor, Robert received informal mentoring and coaching from Dr. Jim Prince, Dr. Brian Tsukimura, and Dr. Jorge Benitez, among others who influenced him as a scientist.

“As I was finishing my M.S. at Fresno State, I explored programs in plant breeding and genetics with an interest in crop improvement, and later completed a postdoc where I worked on engineering plant chromosomes and cytology,” he said.

Dr. Calderón-Urrea also encouraged him to write an application for a fellowship from the United States Environmental Protection Agency (EPA), which Robert was awarded in support of his research.

Dr. Prince and Dr. Tsukimura provided advice and support at various points as Robert completed his thesis. In addition, Dr. Benitez provided him with the opportunity to work on an independent research project in his lab, which helped Robert build additional lab skills and breadth of perspective.

“A major factor contributing to my success has been the belief in myself and belief that the work I do benefits humanity,” he said. “It has also been essential to develop people and communication skills, and to develop and nurture a broad network.”

Robert’s current position is with Bayer in the Crop Science Division as an Applied Molecular Biology Lead. He leads a team of scientists working to enable our genome editing pipeline.

Important mentors and coaches along the way were instrumental in helping him understand himself and his potential, and in helping him to navigate career and life choices.

“Mentors have been such an important part of my career, that it inspired me to develop and lead a mentoring program at Bayer, where we pair internal mentors with academic scientists (grads and post grads) at five universities, with a focus on development of industry competencies,” he said.

Robert has many fond memories of the people in the biology program at Fresno State.

“Scientists are generally fascinating people who have unique life stories, and many have spent many hours/years/lifetimes immersed in their science,” he said. “The people and relationships that came along as a graduate student in the biology program will stay with me forever, and some have become life-long friends.”